Sexy Brazilian Ladies Go T0pless To Cerebrate Dramatic Win After World Cup Match (Photos)
Brazil fans in Rio celebrated by going T0pless after their dramatic late win over Costa Rica following goals from Philippe Coutinho and Neymar. Brazil struggled to score against Costa Rica â until a twin peak in stoppage time.
Philippe Coutinho and Neymar clinched victory to put Brazil top of Group E. Back home it was Brazil 2 Bras 0 as football-mad females turned into Costa streakers by peeling off their tops to reveal bodies painted yellow and green. But the nation would have torn a strip off their heroes if they been held to a draw by the Central American outsiders. 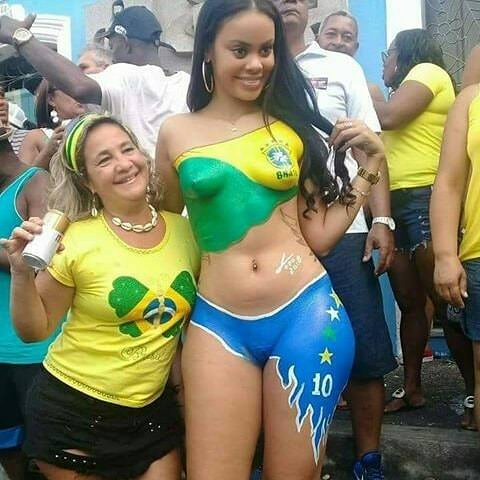 Switzerland had held Brazil to a 1-1 stalemate in the opener. And another draw would have left Brazil sweating nervously for their group finale against Serbia. Instead they look comfortable â when they could so easily have joined fellow South American giants Argentina in the World Cup doldrums.
The win sparked a carnival spirit in the Brazil capital as thousands thronged in a pageant of colour and song to watch the action on a big screen.